Confessions of a Lunatic Soccer Mom

Last fall my five-year-old son was on his first soccer team. The weather was crisp and so he spent most games running off the field to tell me he was cold or tired or that he hated soccer. Even when I resorted to bribery; yes, I am that momâ€”score a goal, get a Hot Wheelâ€”he was still more like a shepherd hovering around the outside of the field herding the ball, than like a mini David Beckham. His team won only one game the entire season and he never scored a goal.

Now, Iâ€™m no athlete. I was never good at sportsâ€”not soccer, not cheerleading, not even mini-golf. I spent gym classes shrinking if a ball even came towards me. Yet somehow this 4-and 5-year-old soccer league became the place where I needed to prove myself. After most games, we discovered that his friends from other teams in the league had scored goals, and our conversations would inevitably go like this:
â€œEli, Aiden scored several goals today. If you tried hard like him you could score goals too. But you have to stop running off the field.â€

â€œI know mom. Can I go to the playground now?â€

As each game passed I morphed deeper into the black swan version of myself: lunatic soccer mommy. I was ashamed of my son, ashamed of myself for not being athletic and for passing on my uncoordinated genes to him. I was ashamed that I was entertaining such irrational thoughts. Meanwhile, Eli played each game completely unconcerned and unaware of his mommyâ€™s nervous breakdown on the sidelines.
Psalm 34: 1-3
1 I will extol the Lord at all times; his praise will always be on my lips.
2 My soul will boast in the Lord; let the afflicted hear and rejoice.
3 Glorify the Lord with me; let us exalt his name together.
King David was a man who did nothing halfheartedly, and this psalm that he wrote is a good example. The Psalm in its entirety is an acrostic poem, which means that in Hebrew, each line starts with each successive letter of the Hebrew alphabetâ€” from a to z or from aleph to tav.
The reason I think that is interesting (besides the fact that I am a nerd) is that itâ€™s clear that David had great intentionality and artistry when he wrote this poemâ€”whatever he has written here, we donâ€™t want to miss.
For the first three verses David opens with praise to God. He says I will extol the Lordâ€” meaning I will bless the Lord. His praise will continually be on my lips. Glorify the Lord. Exalt the Lord. My soul will boast in the Lord.
The Hebrew understanding of the soul was that it was the seat of emotion and desire. When David writes that his soul is boasting in the Lord, he is saying, with everything that I want, everything that I feel, everything that I do, everything that I am, I will praise Yahweh and keep on praising Him always.
David wrote Psalm 34 about a time in his life when he was a wanted man. The acting king Saul was jealous of Davidâ€™s success in battle, favor with God and the peopleâ€”they were singing songs about David and had nicknamed him the king of the landâ€”and he wanted David dead.
So David was on the run and ended up in city of , probably looking for sanctuary or help. Unfortunately, his reputation proceeded him; the king of â€™s servants recognized him and brought him before their king. 1st Samuel 21 tell us, â€œDavid was very much afraid of the Achish king of . So he pretended to be insane in their presence.â€
David literally started acting like a crazy man. 1stSamuel 21:13 describes David drooling and drawing strange pictures on the doors of the kingâ€™s castle.  Itâ€™s sort of a funny image, but it was actually a terrifying time for David and to protect his life, he made himself a fool.
It is within that framework that David writes, â€œI will praise the Lord at all times.â€ 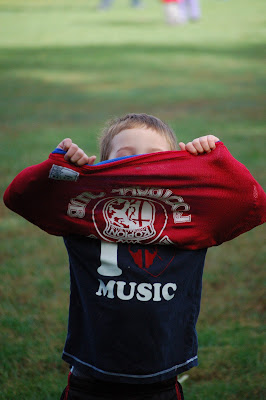 In a significantly less dire situationâ€”my sonâ€™s soccer games of all placesâ€”I made myself a fool and I probably made my son feel like a fool, projecting insecurities on him that didnâ€™t exist and pressuring him to earn goals for Hot Wheels and ultimately, for me.

But my son is enough. He has nothing to prove to me.
Being a part of a 5 year-old soccer league is not about being fast or even good. Itâ€™s not even about kicking the ball. Itâ€™s about having fun, making friends, being outside, and learning how to stay in the game. Itâ€™s about having your mom cheer you from the sidelines and give you high-fives whether or not you scored a goalâ€¦ and maybe sheâ€™ll even take you to pick out a Hot Wheels car just because you played the game.
I will no longer allow shame to be the narrative by which I define my son or myself.  I will no longer allow shame to claim any shadow over a soccer game, over a failed parenting moment, or over not feeling enough. I will follow Davidâ€™s example and fight shame with praise.


Today I praise God for allowing me to clumsily play the gameâ€”
and for reminding me of that before t-ball starts.