Days 6-9 of the Marriage Attitude Experiement

Sorry it’s been a few days since I’ve posted. We’ve had more illness at home–when will this wretched crazy disease of a winter end? I really shouldn’t complain. We have great pediatricians and access to medical care. But, it has meant I haven’t been at my computer for while…and I KNOW you’ve been waiting with baited breath for my next installment of the Marriage Experiment! (I’m having odd spacing issues below, and no patience to fix them…so don’t mind the gaps.)

If you’ve missed it, I’ve documented a thirty-day attempt to change my attitude in my marriage. I love my husband dearly, but I was becoming a total brat. These “days” happened a few months ago. If you missed them, here’s the past few installments: 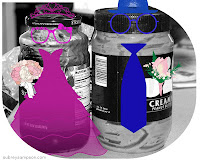 â€œYouâ€™re obstinate, pliant, merry, morose, all at once.
For me thereâ€™s no living with you, or without youâ€
-Martial, 1st Century

Day Six:Subject and I went on a date night. We discussed men struggling with pornography and women struggling with body image issues. Subject believes victory is different than what most people expect. There is victory in the battleâ€”rather than being passive and giving into it, at least God is helping you struggle. Could my attitude be the same? Could just the fact that I want to change be God working in my life?
Iâ€™m encouraged by that.
Day Seven: Today I set out not to complain. I woke up asking God to guard my heart, my tongue, my thoughts. It didnâ€™t last long. A friend came over and we immediately fell into the habit of complaining about our husbands. Yeah, last night Subject was doing this and thatâ€¦I stopped myself, put my hand over my mouth. AHHH I am trying not to do this. Let me rephrase that…Subject and I had a disagreement last night. We had a hard time understanding each other. Now, that at least sounds better than â€œHeâ€™s such a jerk, blah blah blah.â€
Although I know this isnâ€™t a magic solution, sometimes I think the art of making flesh WORD has power. If I want to have a better attitude, I need to speak with better, life-giving, powerful words. A kind of faking it until I make it.
But, I fail again and again. I have no control over my tongue. None. Itâ€™s a toddler, My tongue is a terrible two-year-old throwing a tantrum in the middle of crowded mall. At Christmas. It is red-faced and throwing toys, thatâ€™s my tongue. Can God tame it? Can God mature it past this stage?
Evangelical Christianity tends to mark growth by overcoming sin. We believe in progressive sanctification. Maybe for today, just the battle is a small victory. I praise you God, for small victories.
Day Eight: Could my frustration in marriage, mothering, and life in general be my fault? I mean, yes, obviously marriage is always two peopleâ€™s faultâ€”howâ€™s that for a hallmark card greeting?â€”but I mean, have I been so blind? So immature as to think that this frustration I am feeling is my marriageâ€™s fault? My husbandâ€™s fault? Have I ever stopped to look at how I am contributing or not contributing to the joy in my life?
When I look back at our restaurant row, it wasnâ€™t him throwing the water bottle. No, it was me. I was the one causing the scene. I was the one so eloquently spouting that marriage sucks. He was the one saying that’s not what I said. I love being married to you.
In playwright and author David Mametâ€™s book Writing in Restaurant, on an essay about playing poker, he says that â€œWhen we are depressed, we recreate the world around us to rationalize our mood. We are then likely to overlook or misinterpret happy circumstances.â€
Is that what I have wasted the past several years doing? Have I overlooked my own happy circumstances because Iâ€™ve been in bad mood?
Day Nine: Through the past few days, there are a few unexpected items in my life that have brought me some clarity. You are going to laugh at me. But, nonetheless, here they are.
1. Our vows. As early as the 1500â€™s bride and grooms were exchanging vows. Was forgetting them a common problem, even then? I, Aubrey, take you Subject, to be my wedded husband. To have and to hold, from this day forward, for better, for worse, for richer, for poorer, in sickness and in health, to love and to cherish, forsaking all others, ’till death do us part. And hereto I pledge you my faithfulnessâ€¦to love and to cherish. I am struck by that word, cherish–to care for tenderly and nurture, equivalent to the word â€œcharity.â€ Charity- the act of behaving generously. Have I spent the past eleven years generously and tenderly nurturing my man? Or have I spent the past years making another checklist of who has done what? Whose morning it is to sleep in? Whose turn is it to empty the dishwasher? Have I forsaken nurture and kindness for equity?
2. The Muppets. My kids love the Muppets movie with Jason Segal. We bought the soundtrack and listen to it ALL THE TIME. My three year oldâ€™s favorite song goes like this, â€œIâ€™ve got everything that I need, right in front of me.â€ Weâ€™ll drive down the road singing that song, like a cutesy little television show family band- we sing it at the top of our lungs. One day, my six-year-old, always the analyst, said, â€œBut mom, this song isnâ€™t true. We donâ€™t have everything we need right in front of us.â€
Heâ€™s only 6, so he wasnâ€™t thinking too philosophically on the topicâ€”but I began to wonder,   what if he could believe the lyrics of the songâ€”that just us, singing in the car, enjoying each other and God’s presenceâ€”is everything we need? How would that shape the rest of his life? How would it shape mine?
God, make that true. Help me to be intentional about believing, acting generously, and praising you, because I do have everything I need right in front of me.