Mary’s Song, Part One and a Big Ole’ Christmas tree

I was hoping to share the video of my Christmas message for the Women’s Christmas Banquet on Tuesday night, but unfortunately, it didn’t work. I’m so sad!

But, as we celebrate Advent together, I’ll be sharing an edited version of my talk on Mary’s song:

Two Christmasâ€™s ago my husband brought home a humongous artificial Christmas tree. It is fifteen feet tall and eight feet wide at its thickest. The thing belongs in the mall. Itâ€™s natural environment is not my living room. But, this tree is his passion at Christmastime. 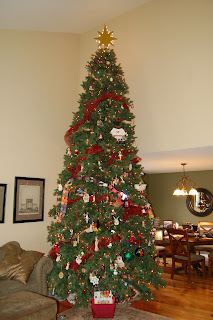 Kevin talked about getting a huge tree for years, but never actually did anything about it. Iâ€™m not sure if it was the stress of having our third son, But, for some reason, last Christmas, as I was recovering from a c-section, dealing with pregnancy hormones, not sleeping, trying to nurse the baby and balance taking care of my two other children, Kevin decided that was the PERFECT TIME to bring home this gigantic tree.
When he started setting it up for the first time, he put the first four pieces together, and I said, “Well, it’s big, but thatâ€™s not too bad.”

I was so overwhelmed with life and this tree seemed to symbolize all of it.
This year, Kevin approached me kind of gingerly, â€œI know it probably wasnâ€™t the best timing last year. Sooooo, what would you think if I set up the big tree again?â€
Now listen, Iâ€™m sleeping better. I feel like myself again. Iâ€™m not nursing. My hormones are pretty much back to normalâ€”as much as they can be when you’re a woman.
So, we put the giant tree up and decorated it with homemade paper chains and ornaments. Kevin made a star out of wood. When I can get my kids to sit down long enough, weâ€™ll sit under it and read Christmas books. Just the other day, my six-year-old said, â€œMom, that is one good-lookinâ€™ tree.â€ My three-year-old calls it our “Christmas,” and he said, â€œMom, our Christmas is soooo beautiful!â€
No matter what circumstances you’re dealing with, no matter how overwhelming things might seem right now, as we enter into a pretty familiar story, my hope and prayer is that weâ€™ll have new sense of childlike aweâ€¦ Christmas is here and itâ€™s sooo beautiful.
Mary’s Song: Luke 1:46-55
And Mary said, “My soul glorifies the Lord and my spirit rejoices in God my Savior. For he has been mindful of the humble state of his servant. From now on all generations will call me blessed for the Mighty One has done great things for meâ€”Holy is his name. His mercy extends to those who fear him from generation to generation. He has performed mighty deeds with his arm; he has scattered those who are proud in their inmost thoughts, He has brought down rulers from their thrones but has lifted up the humble. He has filled the hungry with good things but has sent the rich away empty. He has helped his servant Israel, remembering to be merciful to Abraham and his descendants forever even as he said to our fathers.

Maryâ€™s song refers to Old Testament stories and psalms. It is rich with nods to Abraham, Moses, Hannah, David, and ancient prophets like Isaiah who foretold that one day a Messiah would come and put all things right.

Maryâ€™s song is filled with the hopes of her people. They are physically, politically, and spiritually hungry. They are disappointed and discouraged. They have been oppressed. They are living under Roman occupation and have waited for generations to hear from God, and some are starting to lose faith.
If you are struggling to believe, if you are burnt out, if you are dealing with questions about your future, if your relationships and circumstances are more than you can handle right now, if you’re grieving and you desperately need a sense of hope and comfort this Christmas, if youâ€™ve been waiting on God for what feels like to act, Mary is singing her song for you.
Let me rewind a little bit and set the scene for Maryâ€™s song:
An angel of the Lord, the angel Gabriel, appeared to this young, no-status, virgin woman, Mary and told her that she had found favor with God. The Holy Spirit would overshadow her. She’d become pregnant, give birth to a son, and give him the name Jesus. He would be great, called the Son of the Most High. The Lord God would give him the throne of David, and he would reign forever and ever.
The angel also told Mary that her cousin Elizabeth, who was in her sixties and had been barren, was now six months pregnant.

(By the way, Elizabeth’s hubby didn’t believe Gabriel when he announced that he and Elizabeth would have a baby–who would grow up to be John the Baptist, a modern-day prophet and prepare people for the coming of Jesus–so Gabriel struck him dumb! The man couldn’t speak for nine months. I know some of you are thinking, Hmmm…that might be nice.)
In stark contrast to Zechariah, Mary responded to the angel Gabriel in faith. She said, â€œI am the Lordâ€™s servant. May it be to me as you have said.â€

Some of you have those gorgeous and glamorous high-heeled pregnancies where you glow and your hair and skin look amazing. But, others of you are like me. If we have a pregnancy glow, it is the pallor of nausea beaming off of our faces…So, if this were me, I would have been like. â€œIâ€™m sorry what? Yeah, ole’ Gabey, I donâ€™t think so.â€
Which is probably one of the many reasons why God did not choose me to give birth to his son, Jesus.
Mary is human, and so we know her faith was not without questions. She didnâ€™t have all the answers, but she knew Godâ€™s word, and she believed that He was going to accomplish what He had said he would.
What you also need to know about the context of Maryâ€™s song is this: At this point in history, Caesar Augustus, the adopted son of Julius Caesar was the Emperor. He had deified his deceased father and set himself up as a son of god. Roman propaganda was going at the time that called Caesar Augustus the savior and the lord. He even referred to himself as â€œTrue Peace and Justice,â€ and proclaimed that he was ushering in a new era for the people. In the Eastern part of his kingdom, Augustus was worshiped as a god by his followers. In other words the man loved himself and loved that people loved him.
But, he was oppressing the Israelites. He was demanding they pay him taxes. They werenâ€™t receiving fair pay for their labor. They were the underdogs of society, they were on the bottom of the rung socio-economically, they were being misled by corrupt leaders, and living in a culture inundated by cultic worship. Godâ€™s people were definitely not experiencing Augustusâ€™ peace and justice.
And so, they were waiting for rescue. They were waiting for the Messiah and King that was promised long ago who would save them from this oppression and reverse their fortune. They were waiting for God to do something new.
We get the sense, very early on in the story of the birth of Jesus, that there is A LOT OF WAITING. Elizabeth and Zechariah have been waiting for years for God to give them a baby, Now, they are waiting to meet their child and see if he really will be a modern-day prophet. Luke chapter one tells us that there are people are waiting outside the temple. Zechariah is waiting to speak again. Mary is waiting to see how her pregnancy unfolds.

On an even larger scale, there has been a time of silence, and Godâ€™s people have been waiting to hear something from Him again.
In the middle of all that waiting, Mary arrives at Elizabethâ€™s house. She barely gets in the door and Elizabethâ€™s babyâ€”that prophet babyâ€”leaps in his mother womb. He points to Jesus. And moved by the Holy Spirit, Elizabeth yells out, â€œBlessed are you Mary and Blessed is the child you will bear. Blessed is she who has believed that what the Lord has said to her will be accomplished!â€
And thatâ€™s when Mary bursts into her songâ€¦.
1
Mary is praising God because He is finally breaking His silence.
It is as if the entire world is ripe with waiting, full with pregnancy, ready to go into labor. Everything politically, financially, emotionally, spiritually is just bursting at the seams for this long-awaited tipping point and God is finally about to do what He promised to do generations ago. Mary finds herself at the center of it all, and she canâ€™t respond in any other way than praise. It is like she is going to explode if she doesnâ€™t burst into song and celebrate what God is doing!
Luke has written Jesusâ€™s birth story with such drama and anticipation. An angel of God has appeared on the scene, A prophet is coming again, Godâ€™s spirit was moving like it had in the ancient days. God was finally acting amongst His people again.
See, the birth of Jesus isnâ€™t some sweet silent night.
In fact, itâ€™s the opposite.
God was about to make the loudest noise He had ever made in the first cries of that baby boy, Jesus.