One Billion Rising: A Global Strike Fighting Violence Against Women

I’m still fighting bronchitis, and two of my sons are sick as well, so I am going to take it easy on the blog this week. Next week (assuming we’re back to good health) I’ll be featuring a series on marriage… and of course, announcing the winner of our Gifts That Give Back Anniversary Giveway (Isn’t that a mouthful?)!
For now:
One Billion Rising.org is inviting one billion people to participate in a global strike fighting violence against women. And it’s a dance–how awesome is that? I’ve included their video below and parts of it are, as you’d expect, quite violent. Please watch at your own discretion.
From their website:
“ONE IN THREE WOMEN ON THE PLANET WILL BE RAPED OR BEATEN IN HER LIFETIME.
ONE BILLION WOMEN VIOLATED IS AN ATROCITY
ONE BILLION WOMEN DANCING IS A REVOLUTION
On V-Dayâ€™s 15th Anniversary, 14 February 2013, we are inviting ONE BILLION women and those who love them to WALK OUT, DANCE, RISE UP, and DEMAND an end to this violence. ONE BILLION RISING will move the earth, activating women and men across every country. V-Day wants the world to see our collective strength, our numbers, our solidarity across borders.
What does ONE BILLION look like? On 14 February 2013, it will look like a REVOLUTION.
ONE BILLION RISING IS:
A global strike
An invitation to dance
A call to men and women to refuse to participate in the status quo until rape and rape culture ends
An act of solidarity, demonstrating to women the commonality of their struggles and their power in numbers
A refusal to accept violence against women and girls as a given
A new time and a new way of being”

Go to One Billion Rising for more info on how you can get involved.

And It’s Your Last Chance To Enter The Giveaway: 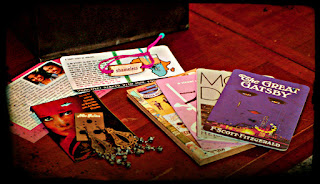 1) Earrings from Women at Risk, International, made by Naam, who was rescued from a life of trafficking and now lives and works fairly in Thailand
2) Vintage book cover note-cards from outofprintclothing.com, an organization who donates books through Books for Africa
3) A “Shameless” Bracelet and an “Africa” bag from Mudlove.com, a prize worth three years of clean water for Africans living in underserved communities (tote bag not pictured, but it’s cute!)
You are automatically entered to win if you’re a fan of this blog or our facebook page.
You can receive extra entries for every “like,” new comment, facebook share, and/or tweet.