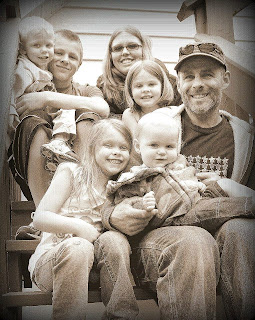 We are kicking off a series of Shameless Women. I am pumped to introduce our first woman, Mrs Dana Weirich.

Dana is stay-at-home-mom to 4 kids, and a teenage stepson. She is a recovering addict and has been sober since 2002. God has done incredible beauty-from-ashes work in her life.

Dana is an awesome momâ€”committed to creating a new family legacy for her own children. Her kids are involved in dance and AWANA and she and her husband, Chuck, hope to begin fostering children within the next five years. Also, Dana will begin working towards her college degree in the fall.

We sat down while all seven of our kids were playing together (it was crazy!) and managed to have this interview. You wonâ€™t want to miss a word.

When did you start using?
I started drinking in the seventh grade. My mom was a single mom and my brother and I were latchkey kids. I lived in an apartment complex in with a lot of other latchkey kids and we just started drinking for fun and getting into trouble. My parents got divorced when I was five, and a year later my mom started dating a guy who was abusive. They broke up just before seventh grade and for the first time, I didnâ€™t have overpowering controlling force over me anymore. I didnâ€™t know how to live without that, so I went off the deep end.
When was the first time you got drunk?
That was also 7th grade. The first time I got drunk, I liked it. I knew that I wanted do it again as much as I possibly could.  From there I began to drink and use drugs whenever I could. I basically talked my 17-year-old neighbor into letting me smoke weed with her. She didnâ€™t want me to because I was so young, but I convinced her to let me. It was the same with a friend and smoking cigarettes. It was kind of a reverse peer-pressure.
Tell me about High school.
About a month into Sophomore year, we moved from Wheaton to Aurora. My mom bought her first home there. When I started at , I looked for the kind of friends that I could drink with and smoke pot withâ€”and I got into a two-year abusive relationship. My boyfriend was nice to his other girlfriends…but abusers can see vulnerability in people. He began to control me. He would not let me paint my nails or put my hair in a pony tail. There was a long period of time where he would only allow me to wear black. He also wouldn’t allow me to see my father. Heâ€™d say he was trying to protect me from my dad, but really he couldnâ€™t control me there, because I had friends and another life there.
Where was your dad through all of this?
When we  were little, weâ€™d see my dad every other week. But my dad is an alcoholic. So when he had us, he’d sometimes take my little brother and me to sit in the bar for like eight hours a day. My grandpa would come rescue us. So, weâ€™d usually be with my aunt or grandma and grandpa. I wouldnâ€™t trade that for anything in the world. They were the only real family connection I had.
So you were wavering between two worlds?
The whole time I dated that guy I had two livesâ€”a life controlled life by him, and a secret life where I had friends that he didnâ€™t know about. Iâ€™d go out at 10pm just to get away from the relationship. Mom would let me got out because she didnâ€™t know what else to do. But, Iâ€™d go and get high with neighbor girls.
It got to the point where my desire to do drugs without having to be secretive about it or put limits on it became stronger than my desire to be with this guy. He threatened to kill himself, kill my dog, etc. if I broke up with him.  I finally broke up with him because I wanted freedom to do drugs.
Neither option sounds like freedom.
My self esteem was ruined. I really went off the deep end. I lost 30 pounds of stress weight. But, I was skinny and getting attention from boys. I was doing drugs regularly and sleeping around. I wanted attention. When my best friend at the time started telling me that I was a slut, it became painful. I never really cared before then.
I dropped out of high school for a time. I got into a relationship with a guy who was a few years older than me. I dated him for about a year. This guy asked me to stop using and I liked him enough that I quitâ€”I quit everythingâ€”smoking pot, drinking, cigarettes, everything. It was enough to get me to go back to high school and graduate. I enrolled in college, but then I dropped out because I started drinking again.
So what did you think about God?
Looking back I totally see God in thatâ€”in that guy asking me to quitâ€”whatever the motive or reasoning, I graduated and I didnâ€™t have to go back and get my GED. I always laugh because I think God uses what He knows youâ€™ll listen to.

I got sober Dec 23rd 2002. It was because (lol) another guy I had a crush on wanted to date me, but wouldnâ€™t let me use. I quit so I could date him. He told me to start going to meetings.

We only dated for a couple of weeks but Iâ€™ve been sober since.I kept going to NA and AA meetings. I had a sponsor. But, God really wasnâ€™t in my life. I wasnâ€™t on or off about God, I just didnâ€™t know.

I remember sitting in a Third-Step meeting (You believe in a power greater than yourself and came to the decision to turn your life over to God as you see him). It was a huge meeting at a halfway house at a basement in  (Cocaine Anonymous). All these people were sharing how they came to believe in God and talking about all the things that God had done for them. Some had terminal illnesses yet they were still at meetings.

I had a belief in God but I hadnâ€™t connected that God to Jesus or anything personal. I knew IT was bigger than me and I was calling it God.

When did you become a Christian?
In 2006, I wasn’t even married a year, and had my first daughter, Charlotte. I knew I wanted my familyâ€™s legacy to be different. We lived a block away from West Chicago Bible Church and I would be walking in the stroller and I could hear them singing worship songs. I just decided with or without my husband, I was gonna go and bring and do somethingâ€”anything to make my kids’ life different than the life I had. So I just started going. Then there was a womenâ€™s bible study and I started going to that.

It was like going to meetings. I just kept doing it.

I donâ€™t think I had a big conversion moment. It just was that God in my head became Jesus. I got baptized a year later.
When did your husband become a Christian?
After my second daughter was born, I brought my kids to the egg hunt at Community Fellowship Church in West Chicago. There were so many familiesâ€”so many people, it was what I had been missingâ€”Christian Community with other young families. The Sunday after that egg hunt I started going to CF.

When I made the decision to start going to Community Fellowship, it wasnâ€™t that much later that Chuck went on a missions trip, without ever having gone to church. The guys on the trip were super cool to him. I can see how God did it all. And at the Menâ€™s Advance the next spring, Chuck became a Christian.

If you could say anything to the most broken/most ashamed version of yourself, what would you say?
I would say that Jesus loves you. And that He is the someone who has been thereâ€”he has experienced suffering. He is not just some fluffy God. He is a God that knows pain and sorrow and hurt. And He wants your pain and your praise.
And one last thing. I would say I wish you could see yourself like Jesus sees you.