If you’ve missed any of the guest posts from this series on Shame and Spiritual Abuse, you can catch up here:

Out in the Cold, by Matt Rose

Signs of a Spiritually Abusive System, by Kathy Jack

Today’s guest blogger is Marlena Graves, the author of A Beautiful Disaster, a lovely and powerful book on finding hope in the midst of brokenness. A member of the Redbud Writers Guild, Graves is a regular contributor to Christianity Today’s Her.meneutics, Gifted for Leadership and more. You can find her at Marlenagraves.com.

Briefly: Why I Am Still A Christian
Well, Iâ€™ll just dive in. Iâ€™ll try to sum up a complicated story in a nutshell, though thatâ€™s pretty hard to do. Itâ€™s about my experience with Christians who acted like devils. These supposed Christians used godless means to achieve what they believed to be Godâ€™s ends. People who heard about what happened often asked me why I was still a Christian. 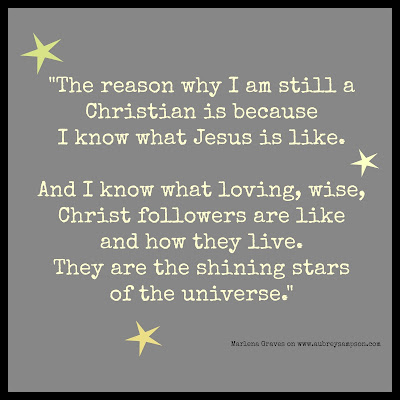 The nutshell: a fundamentalist faction of a large Protestant denomination attempted a coup of our educational institution. They succeeded. They ousted the president, several vice presidents, many faculty members, and staff. Lots of trustees resigned in protest. Publicly, the perpetrators denied the purge. In private, they acknowledged what they were doing. A certain senior administrator fudged the files of my friends, and trumped up false charges against my friendsâ€”accusing them of doctrinal infidelity.
If my friends publicly spoke out about what was happening to them, theyâ€™d lose their jobs. That meant theyâ€™d lose their insurance and that their families would be in dire straits. The administration told them they could sign a non-disclosure agreement and as a result, they could keep their jobs for that year. They were paid for their silence. And they chose payment and silence because they had to feed their families.
Here were these administrators who were supposed to be spiritual leaders on campus and in their churches and, I suppose, in their families. But they lied about why much beloved faculty members, staff members, the president, and vice presidents resigned. None of these people resigned. They were forced to quit so that the fundamentalists could take over and put their own people in these positions instead.
Lies, blackmailing, bullyingâ€”I couldnâ€™t understand how such â€œGod-honoring menâ€ could constantly engage in such sins and feel no remorse, no pangs of guilt. They said, â€œItâ€™s the price we have to pay for purity.â€ Really? All of the people they got rid of were well thought of by their peers and by the students. They were upstanding and full of integrity. This coupâ€”it was unpopular, treacherous, mean-spirited. A devil coup.

But, of course, they were cleaning house for Jesus. I suppose they fancied themselves as Jesus cleansing the temple.
So, almost every single person above me was ousted, or left before they were taken out.  A whole department. They got rid of theologians and philosophersâ€”another department. They either made life so miserable for them that they left on their own, or they fudged their files, or they claimed that they had to be let go for financial reasons (only to turn around and hire their own people at comparable or greater salaries). And then they started going through other departments, seeing who they might purge there. All for Jesus.
Now, many faculty and staff members who remain, those who survived the purge, those appalled with what happened to us and who are also scared of losing their jobs, tell me they are working under tyranny. Their Facebook accounts are under surveillance. Their politics and lives and friends are under surveillance.
Big Brother Christian is watching them.
What a way to live. And of course, they canâ€™t say anything about this publicly. They canâ€™t tell the students about the hellish work environment they inhabit. They have to put on a happy face and be very careful about what they reveal of themselves lest they slip up and be brought before the tribunal. It sounds so far-fetched, like the book, 1984. But itâ€™s everyday reality for many who remain in that place.
It has taken me a few years to forgive the perpetrators. They destroyed a community, forced us to leave friends and a job that we loved. Because not only did they do real world harm to my friends, peers, and superiors, they did real harm to my family and me.
Sometimes I still get incredibly angry when I see their two-faced behavior. They act one way to parents of students, students, and those in their inner circle. Then they tyrannize the rest. It is a toxic environment of fear. I wonder why the coup was successfulâ€”and I know a lot of that is related to money and who knows who and the false narratives, the spin, that went forth from the power brokers. I wonder how they acted and continue to act so despicably yet without remorse.
Why arenâ€™t they conscience stricken?
I know that if I did what they did, or thought about doing what they did, that the Lord would make me miserable through the conviction of the Holy Spirit. I wouldnâ€™t be able to live with myself. Then I think, it must be that I struggle with other sins with which they donâ€™t struggle.
We sin differently.
If all I knew about Christianity was what I experienced in that environment, with those charlatans, I might not still be a Christian.

The reason why I am still a Christian is because I know what Jesus is like. I know what loving, wise, Christ followers are like and how they live. They are the shining stars of the universe.
________________
What about you? Have you faced church-hurt and remained a follower of Christ? What keeps you going as a Christian?